For those who traveled from Facebook, congratulations! You have found the pot of gold at the end of the rainbow...unless you're after me Lucky Charms! Since I have fellow authors doing their 2014 "To-do" list, I shall embark on mine - here goes.

First off, Six Feet From Hell, the series that started my writing career (such as it is) will be coming to an end.  I know, bummer.  The last two books, Unity and Endgame will be released in 2014 and will signify the end of that series.  I have a couple short stories that are set in the 6FFH universe, and those will be completed around Halloween. The short stories will be made free for a short period of time, and will fill in the blanks some of the holes in the series.  There are five stories that will be in it, possibly more.  After the release of Endgame, however, there will be no more of the 6FFH books, so enjoy the last two! I have a doozy of an ending for the series.  Some people will love it, others will absolutely loathe it, but it's my series, and I will do as I damn well please!

Moving on! Some other stories that have been on the back burner will be rotated into the forefront.  They might not be completed, but significant progress and attention will be made to them this year.  Most notably, my sci-fi novel Lost Between will be completed this year.  R.I.P. Van Winkle will continue in its monthly installments throughout the year until completion, which is roughly September or October.  I fully plan on getting these two out this year, but shit happens.

I have some other stories that may or may not receive the publishing treatment, most notably three projects.  One is a sci-fi/love story (I know, not my forte, but hey, I've got a good story to tell), the other two are zombie-related, but completely separate from one another.  One is codename "Bite," the other is codename "Shepherd." I'll let you guys simmer over those two little clues.  All three will be one-off novels, meaning no sequels planned.  Having said that, I won't rule out doing one for any of the three if it is warranted.

I have a short story that will be finished soon named Hell Is and it'll be posted here on the blog and Smashwords.  Aside from that, nothing new from the short story section, but they are spur of the moment things. There will inevitably be more ideas pop up, so I will keep ya'll posted.

2014 looks to be a good year, so stay tuned and be sure to sign up on the right-hand side of the front page for e-mail updates from the blog. I will try to do at least one update per week, but we will see.  I have a new Xbox One, so I will have to tear myself away from it to get some of these done, but rest assured, they will be taken care of.  That's all for now, so back to work I go!

Posted by Joseph Coley at 9:13 PM No comments:

Here is the cover art for Six Feet From Hell: Unity, courtesy of Matthew Riggenbach at www.shaedstudios.com  Matthew has done all of my cover art to date, as well as art for John O'Brien, Mark Tufo, and others.  Also, the release date for Unity will be...February 26th, 2014.  Date is tentative for now, but I feel that it will be completed and finished editing by then.  I will also be releasing R.I.P. Van Winkle Part IV on January 29th, and Part V will be released the same day as Unity.  Stay tuned for more info, as I will pass it along as I get it! 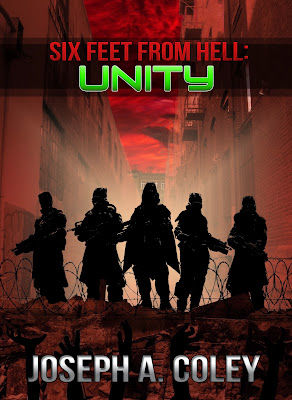 Posted by Joseph Coley at 1:07 PM No comments: